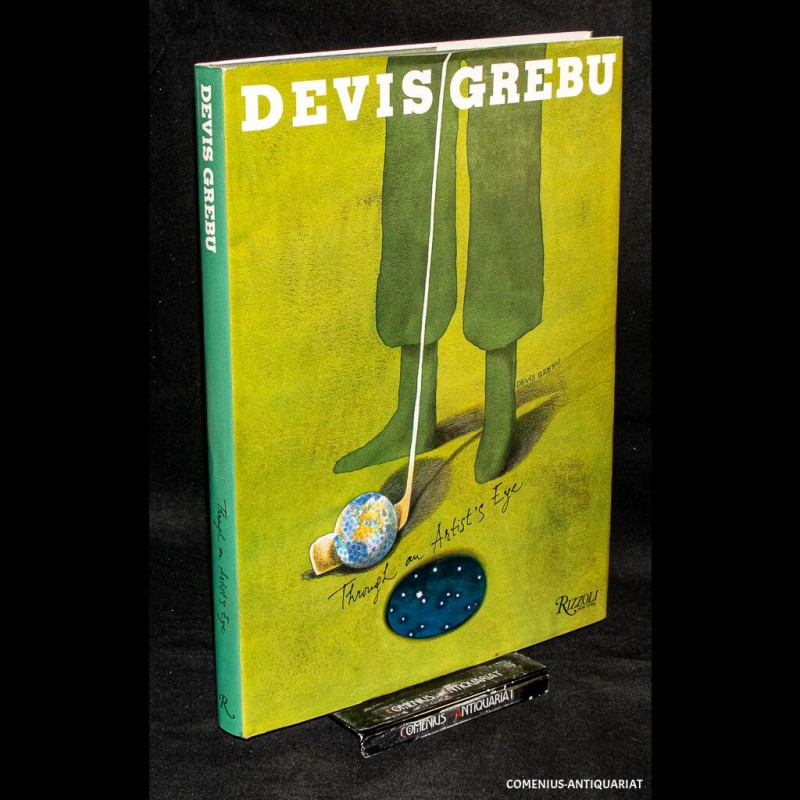 Grebu .:. Through an Artist’s Eye

This first monograph captures the unique world view of Romanian born painter, cartoonist, and graphic artist Devis Grebu, whose illustrations are familiar to newspaper and magazine readers around the globe. Grebu is best known for his delicate, often whimsical watercolors and drawings that comment—like the work of his countryman Saul Steinberg—on human absurdity through a gentle humor, a challenging paradox, or a single wrenching image. A knife that is actually a child's seesaw; earth as an egg with a cracked shell, or a golf ball about to be sunk into a starry void; a man watering a tree that is actually a smokestack—these are some of the visions of this superb ironist. True editorials, which synthesize an idea, a text, and a situation into a powerful expression, Grebu's illustrations are jewellike works of art in their own right, deftly shaded or washed in subtle but richly variegated colors.
In this collection of provocative work, we are treated to an art that speaks to the intelligence as well as to the eye. Grebu takes us on a visual and philosophical "journey" through his imaginative landscape in which each picture explores the theme of venturing, questioning, reaching (or not reaching) a destination, and each chapter represents a step along the way of that journey.
Enhanced by Yvette Metral's lyrical texts and Jane Biberman's interview with the artist, these illustrations introduce to the art public the work of a prodigious talent.
150 ILLUSTRATIONS, 100 IN COLOR Born in Costanla, Romania, in 1933, Devis Grebu was educated at the Academy of Fine Arts in Bucharest. Since 1964 he has lived and worked as an artist and designer in Tel Aviv (1964-74), Paris (1974-86), and New York (from 1986). Grebu's illustrations have appeared internationally in countless publications, including the New York Times, the International Herald Tribune, Time, the Washington Post, the Boston Globe, Life, Psychology Today, Playboy, Ms., Harper's, Art Direction, Le Figaro, L'Express, Idea magazine in Japan, and Israel magazine. His work has been displayed in oneman shows and group exhibitions in France, West Germany, Switzerland, Italy, Israel, Japan, and the United States. In addition, he has illustrated over thirty books for adults and children in English, French, and German, including two artist's books, Devis Grebu's New York, New York and Letters, a collection of ink drawings. He has also created designs for film and political posters, theater sets, costumes, and stamps (for which he twice won the acclaimed San Gabriele Award). Featured in Who's Who in Graphic Art, Grebu has been the recipient of numerous prizes and honors, among them the 1987 Page One Award for best illustration, presented by the Newspaper Guild of New York; the 1986 Sydney Taylor Book Award for best illustrated book, presented by the Association of Jewish Libraries; awards for the best illustrated children's books in France (1976) and Austria (1977) and for best magazine cover in France (1980); as well as inclusion in Print magazine's prestigious annual in 1987.

YVETTE METRAL has collaborated on a number of projects with Devis Grebu. An author, she has also adapted and translated many books into French from English and Italian, including Chaim Potok's The Book of Lights.

JANE BIBERMAN is a journalist and the editor of Inside magazine, in which many of the works reproduced in this book have appeared.