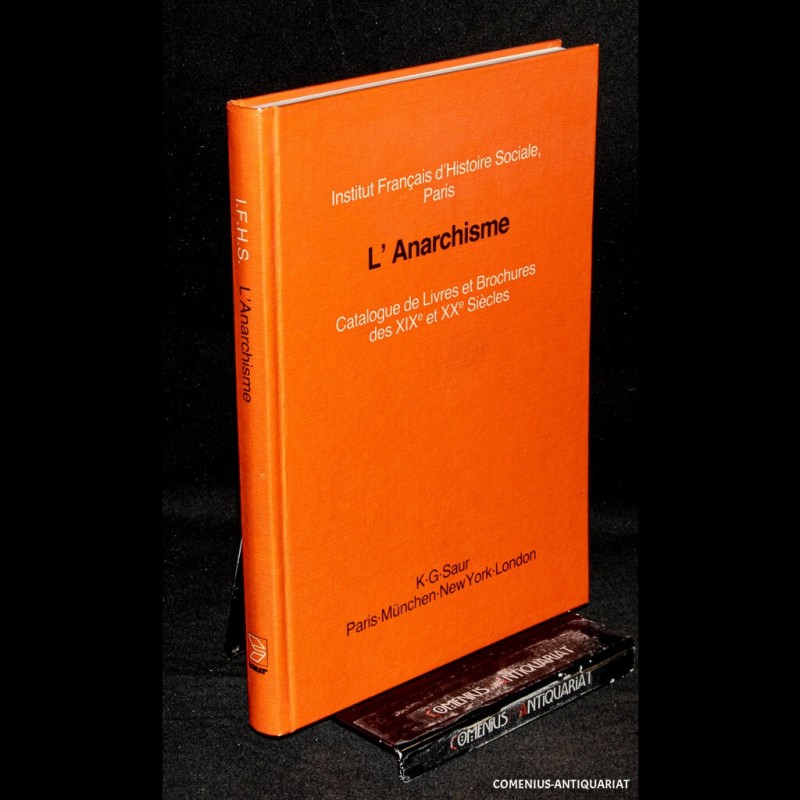 Description
Institut Français d’Histoire Sociale (Paris),
L’anarchisme. Catalogue de livres et brochures des XIXe et XXe siècles = Anarchism: a catalogue of XIXth and XXth centuries books and pamphlets from different countries. Paris, München: Saur, 4, 170 Seiten. Pappband (gebunden). 212 x 153 mm. 323 g* Rédigé sous la dir. de Denise Fauvel-Rouif; par Janine Gaillemin, Marie-Aude Sowerwine-Mareschal et Diana Richet. - Vereinzelte Markierungen mit Bleistift.
Bestell-Nr.158285 | ISBN: 3-598-10442-1I.F.H.S. | Anarchismus | Bibliographien
FOREWORD
The books and leaflets listed in the following catalogue, often rare and even impossible to find anywhere, concern France and other European countries like Belgium, Italy, Portugal, Spain, Switzerland, as well as North and South America and Asia. They frequently reveal the origins of many contemporary movements of liberation or of emancipation and of different political theories. They confirm that many important upheavals can result from ideas expressed by small groups, ideas worth knowing whether we approve or disapprove of them. All this documentation has been given to the "Institut Français d'Histoire Sociale" by militants, historians and different other personalities whose curiosity and generosity have often incite to study the different social theories and to seek for solutions to the conflicts from which suffer our societies.

Among these donors, I will only mention the main ones : Renee LAMBERET, an historian well known in Spain, Portugal and South America, who recently disappeared and whose manuscripts and printed matters constitute a fund of a considerable interest ; Emile ARMAND who, in order to spread his ideas, was a militant till he was eighty-nine years old ; Charles-Auguste BONTEMPS, poet, writer, amateur of fine arts, who died a few days ago at over eighty-eight and who remained active till the end ; Pierre MONATTE, a courageous man who was faithful to revolutionary trade-unionism all his life ; Frederic VANDAMME-MAURICIUS, anarchist, then member of the SFIO (a socialist political party), journalist, writer ; Maurice DOMMANGET,whose passion for history and the study of social problems led him, with the help of his wife, to publish over fifty books and hundreds of articles and accounts of historical or literary works relating, most of the time, to syndicalism in the field of education, socialism, communism, anarchism.
When looking through the following catalogue, one can begin to understand the many reasons which have brought to take interest in the ideas of the anarchists or to conceive them, men and women as different from one another as those already mentioned or, for instance,Michel BAKOUNINE, Camille BERNERI, Carlo CAFIERO, Voltairine de CLEYRE, Havelock ELLIS, Sebastien FAURE, Francisco FERRER, Emma GOLDMAN, Jean GRAVE, N.I. MAKHNO, Errico MALATESTA, Louise MICHEL, Pierre Joseph PROUDHON, Elisee RECLUS, Georges Bernard SHAW, Max STIRNER, Henri THOREAU, Benjamin TUCKER. This variety may be explained by the fact that anarchism aims at a total reorganization of society and thus can make adepts representing many different disciplines and belonging to very contrasted social categories. In order to complete their information, research workers will find at the I.F.H.S. : on the one hand, documents, other than books and leaflets, concerning anarchism : manuscripts (thousands of letters whose authors may be drawers or painters like Camille PISSARO - cf. Mrs BAILLY-HERZBERG's book including part of PISSARO's correspondence -, POULBOT, Paul SIGNAC, WILLETTE, LUCE ; poets, composers, the way of life recommended by the Anarchists corresponding generally to the artists' tendencies) ; files on a given subject ; periodicals ; iconographical documents (Aline DARDEL's thesis will be consulted with profit on this particular point : it relates to the drawings and illustrated publications of LES TEMPS NOUVEAUX, an anarchist periodical) ;
on the other hand, documents concerning communism, socialism, trade-unionism, cooperation, feminism, which can help to analyse the similarities or disparities between these movements and anarchism.
Let us say that if the catalogue I am presenting now, conceived to be consulted not only at our Documentation Center but also elsewhere in France and in other countries, is - as it has been often the case of the other catalogues and inventories - the starting point of studies useful for the advancement of humanistic sciences, it will be possible to say that the objective of our founders and of their successors is attained.
I would not like to end this brief introduction without expressing my warmest thanks to M. Jean GLENISSON, Director of the "Institut de Recherche et d'His-toire des Textes" of the "Centre National de la Recherche Scientifique", without whom the catalogue on Anarchism could not have been published. In helping us, M. GLENISSON has given an example of total disinterestedness and has shown what solidarity can be in the scientific community.
October 1981
Denise FAUVEL-ROUIF
General Secretary of the I.F.H.S.
Product Details
158285
1 Item