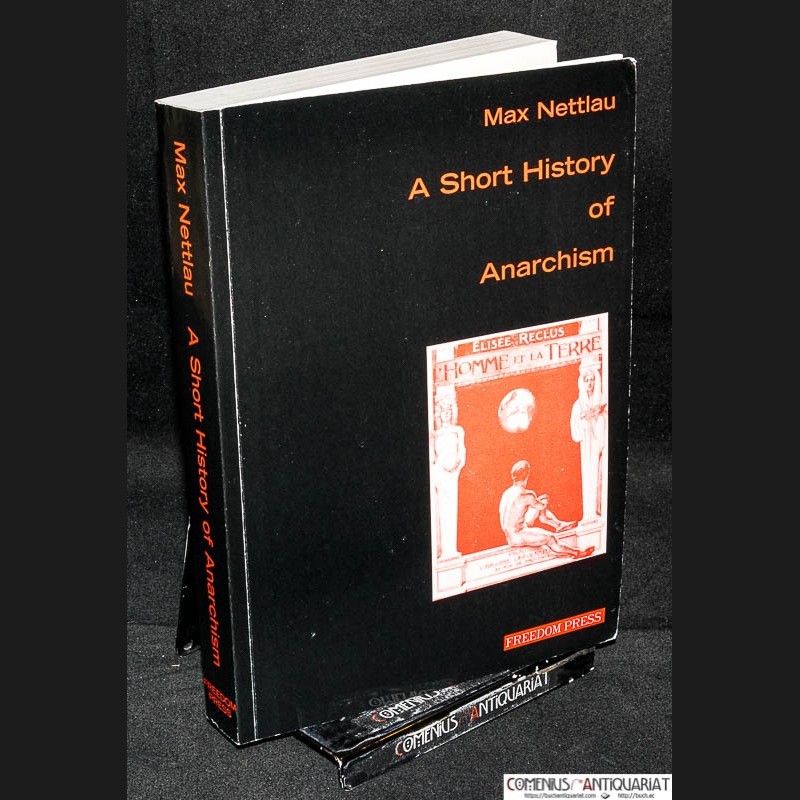 Nettlau .:. A Short History of Anarchism

Beschreibung
Nettlau, Max,
A Short History of Anarchism. London: Freedom, 1996. xxiii, 406 Seiten mit Literaturverzeichnis. Broschur. 570 g* Translated by Pilat Isca, edited by Heiner M. Becker.
Bestell-Nr.156664 | ISBN: 0-900384-89-1Nettlau | Anarchismus |
"May all the anarchists, all the libertarians, all freedomloving human beings become a united force, which, while preserving the autonomy of each of its members, will practise mutual aid among all of them. May this force, by overthrowing authority in one place, weakening it in another, through our own genuine progress, develop in innumerable ways in order to advance liberty on a small scale and a large one, within ourselves and around us, anywhere and everywhere. Let us have hope. For authority, powerful as it may be, can bring forth nothing but evil. All the good in the world has come, is now coming and will always come only with liberty and from liberty."

Max Nettlau, who was born in 1865 near Vienna and died in 1944 in Amsterdam, was the most proficient and still is the most important historian of anarchism. This onevolume introduction to the history of anarchist ideas and early movements, summarising the author's monumental 9volume history and several biographies, is the most reliable guide to the early anarchist movement up to the 1930s that has yet been produced. PREFACE
This English translation of Max Nettlau's Spanish text of 193234 was made by the late Ida Pilat Isca, and its publication was financed by a donation from the late Valerio Isca. The translation was first edited by David Poole and Carol Saunders, and later revised and compared with the original. Much of the production work was done by Stephanie Cloete.
Bibliographical references have been completed where appropriate and integrated into appendices following the text. Biographical and other information has also been integrated into the index.
Heiner M. Becker CONTENTS
Preface
Introduction ix
1. Liberty and anarchism: its earliest manifestations and
libertarian ideas up to 1789.
2. William Godwin; the Illuminati; Robert Owen and William
Thompson; Fourier and some of his followers. 14
Individualist anarchism in the United States, England
and elsewhere. The early American libertarian
intellectuals. 30
4. Proudhon and Proudhonism in different countries, In
particular in France, Spain and Germany 43
5. Anarchist ideas in Germany from Max Stirner to Eugen Dühring
and Gustav Landauer. 52
6. The first French communist anarchists and other libertarian
forerunners. L'Humanitaire and its group; Bellegarrigue; the
young Elisée Reclus; Déjacque; Coeurderoy 64
7. Anarchist origins in Spain, Italy and Russia; Catalonia
and Pi y Margall; Pisacane; Bakunin. Early signs of
libertarian ideas in other countries up to 1870. 82
8. The origins of anti-authoritarian collectivism in the
International and in the groups formed by Bakunin in
the years 1864-1868. 99
9. Libertarian ideas in the International from 1869 to
1872. Origins of the syndicalist conception of the
society of the future. The Paris Commune and
communalism. 114
10. The anti-authoritarian International until 1877. The
origins of anarcho-communism in 1876-1880. 129
11. Anarchists and social revolutionaries. Kropotkin; Elisée
Reclus. Anarchist communism in France 1877-1894.
12. Italy: Anarchist communism, and its interpretation by
Malatesta and Merlino. 167
13. Spain: Anarchist collectivism. Anarchism without
adjectives. Anarchist communism. Overview of the years
1870-1936. 180
14. Anarchist ideas in England, the United States, Germany,
Switzerland, and Belgium since about 1880. 209
15. Anarchist and syndicalist movements in the Netherlands
and in the Scandinavian countries. 231
16. Other countries: Russia and the East; Africa; Australia;
Latin America. 245
17. Revolutionary syndicalism in France. Fernand Pelloutier.
Emile Pouget. Kropotkin, Malatesta and syndicalism
(1895-1914). 266
18. French anarchism 1895-1914. The years 1895-1914.
The War. Communism and libertarian activities.
Conclusion 286
Note on Bibliographies and Index. . 297
Bibliography (periodicals). . 299
Bibliography (books and articles). . 309
Short guide to Nettlau's relevant works . 351
Index (with biographical notes). . 367
Artikeldetails
156664
3 Artikel